CCCC was formed in May 2012 in response to a community discussion regarding the hunting of Greater Sandhill Cranes in Northwest Colorado. Birdwatchers, nature-lovers, and other interested citizens of Northwest Colorado were concerned that these migratory birds, still listed by the state as a Tier 1 species of concern, would decline in numbers and disappear from the area.

Since its inception, CCCC has concentrated on providing public education to ensure the protection of the Rocky Mountain Population of Greater Sandhill Cranes. In addition to the festival and educational programs for school children and community groups, CCCC monitors the status of cranes in the area and partners with other organizations engaged in habitat improvement projects for cranes and wildlife in Northwest Colorado. Since 2015 CCCC has spearheaded a project called Crops for Cranes. CCCC is working with willing farmers and landowners in the Yampa Valley to help provide adequate food supplies for cranes just prior to migration. Click here to learn more about Crops for Cranes.

State officials have been working for years on the issue of water usage and replenishment of aquifers in the semi-arid San Luis Valley of Southwestern Colorado. The San Luis Valley is a critical staging area for the Rocky Mountain Population of Greater Sandhill Cranes. The cranes stop to rest and feed at the Alamosa and Monte Vista National Wildlife Refuges on both their northbound and southbound migrations. CCCC is actively monitoring the water situation on these refuges and is prepared to offer help, if needed. 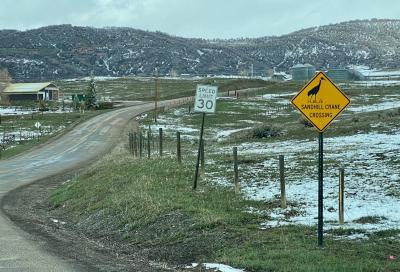 CCCC is working to keep our cranes safe in all kinds of ways. When we recently learned that construction for the new Steamboat Springs PK8 school would take place close to a long-standing crane nesting area, we jumped into action. We contacted school and county officials to make them aware of the cranes and of our concern that the increased traffic could endanger their safety. We suggested that they place “crane crossing signs” on the road leading to the school in the area where the cranes cross to feed in the fields during the day. CCCC even offered to cover the cost of the signs. We are most grateful to Ray DuBois and Mike Mordi of Routt County Public Works who approved our request and ordered and installed the signs in a very timely manner. We hope the signs will keep this crane pair (who have nested in the same area for many years) and their chicks safe and sound.

In January 2021, Erin Gelling, our first full-time program director began working for CCCC. Gelling has volunteered with our organization since 2014, and is in the process of completing a master’s degree in rangeland ecology from the University of Wyoming. She will take on the task of running CCCC’s many existing programs, including managing its more than 85 volunteers, and will also amplify CCCC’s impact by developing new programs.

Click here to read an article published in the Steamboat Pilot & Today about CCCC celebrating our 10th year as a non-profit! Read about our upcoming nest camera project, our new Program Director, Erin Gelling, and our Creative Arts Scholarship Contest, which will be offering $10,000 in scholarships this year.

Click here to read an article entitled “Rise of the Cranes” that was published in the Steamboat Pilot & Today newspaper on September 27, 2015. This article contains interesting crane facts and talks about the origins of the Yampa Valley Crane Festival, as well as our Crops for Cranes program.

Click here to read an article published in Steamboat Magazine in 2016 written by one of our volunteers and entitled “Keeping the Cranes”.

Click here to read an article published in the Steamboat Pilot & Today newspaper on August 27, 2019, about the 2019 Yampa Valley Crane Festival.

Click here to read an article published March 16, 2018 in the Craig Press newspaper about progress in our “Crops for Cranes” program, which encourages landowners to plant grain crops that nourish the cranes in preparation for their southern migration in the fall.

Click here to read an article published in the Steamboat Pilot & Today newspaper on March 26, 2020, about the Creative Arts Contest that we sponsor for high school seniors in Routt and Moffatt Counties as one of our educational programs.

Click here to read an article published in the Steamboat Pilot & Today newspaper on January 10, 2020, about China’s invitation to our President, Nancy Merrill, to travel there and share information about our crane festival with them.

Click here to read an article in the U.S. News and World Report’s travel section ranking the “Best Small Towns to Visit in the USA”. Steamboat is #8.