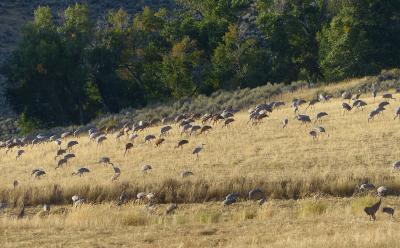 Crops for Cranes is an on-the-ground conservation project being spearheaded by the Colorado Crane Conservation Coalition (CCCC) in cooperation with willing farmers, ranchers, and other conservation organizations in the Yampa Valley of northwestern Colorado.

In recent years agricultural trends have undergone a significant change in the Yampa Valley largely due to economic factors.  Specifically, the production of local grain crops (wheat and oats) has decreased from approximately 85,000 acres in the 1940’s to only 10,000 acres currently. This decrease in grain crop production has potential to adversely impact the cranes. The Greater Sandhill Cranes that stage in the Yampa Valley, especially the young of the year, rely on waste grain crops to provide adequate nutrition for successful migration to their wintering grounds in New Mexico and Arizona. CCCC is concerned that if grain production continues to decrease, cranes may spend less time in the Yampa Valley and may eventually leave the area altogether. This would be a huge loss for the valley’s biodiversity and for the ecotourism that the cranes generate.

The Yampa Valley Crane Festival takes place during the fall staging season when crane numbers are at their peak. A key part of the festival involves bringing people to harvested grain fields and allowing them to have a first-hand experience of the cranes as they eat, dance, and socialize.  These experiences play a critical role in educating attendees about the cranes, the environment, conservation, and the important role that agriculture plays with wildlife in the Yampa Valley. In addition to diminishing grain crops, another challenge CCCC faces as sponsor of the annual crane festival is finding reliable, safe locations for attendees to view the cranes. 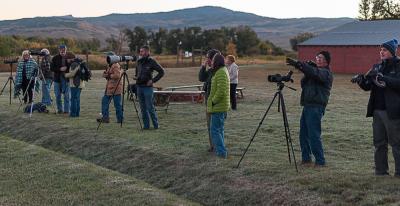 Cranes appear to favor feeding in grain fields that have recently been harvested. Because the timing of the grain harvest varies from year to year, the location for observing cranes remains uncertain until right before and, sometimes, right during the festival. The CCCC, through their “Crops for Cranes” program, is trying to help provide food for the staging cranes and to provide greater predictability for festival attendees for crane viewing. 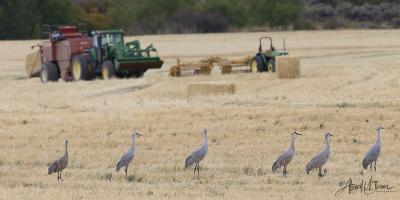 Colorado Crane Conservation Coalition will enter into an individualized agreement with a willing farmer or landowner. When this agreement is made with a farmer who already grows grain crops, CCCC will purchase a certain number of acres of this crop – usually 15 acres or less – at market price. The exact location of these crop areas is determined mutually between the farmer and CCCC. Ideally, these areas also allow in some way for public viewing of the cranes during the crane festival. The crops in these areas are either harvested immediately prior to the crane festival or, in some cases, left standing for the cranes until after the festival. When an agreement is made with a landowner who is not currently growing grain crops, CCCC will cost share in some manner with the landowner for production of a certain number of acres of grain crops to be left for the cranes.

Crops for Cranes Learn about this innovative program in which Yampa Valley farmers and ranchers work together with CCCC to help the cranes and the crane festival. By Laura Foulk and Barb Hughes. Filmed by Barry Kaplan and Erin Gelling. Edited by Erin Gelling.

The Crops for Cranes program is funded through private donations and grants.

Click here to read an article published March 16, 2018 in the Craig Press newspaper about progress in our “Crops for Cranes” program.

Support us: Learn about ways to donate or make a donation.