Who are these birds and where do they come from?

Cranes are the oldest living species of bird with Miocene fossil evidence dating back 10 million years. Sandhill cranes are one of 15 species of cranes throughout the world. The cranes that visit and breed in the Yampa Valley are part of the Rocky Mountain Population (RMP) of Greater Sandhill Cranes. Flocks of sandhills that migrate through eastern Colorado and Nebraska along the Platte River are primarily composed of the sub-species known as the Lesser Sandhill Crane. The RMP of Greater Sandhill Cranes spend the winter in the Uncompahgre Valley in west-central Colorado, New Mexico, Arizona and northern Mexico. They primarily breed in northern Colorado, northeastern Utah, western Wyoming, eastern Idaho, western Montana, and into southern Alberta and Saskatchewan, Canada.

When do cranes usually arrive in the Yampa Valley?

The early birds begin to arrive early in March, followed by the rest of the flock throughout the month of March. They will leave the area in mid to late September.

How big are they?

What color are they?

Adult cranes have grey feathers. They paint them with iron-laden mud and vegetation to turn them rust-color for camouflage during breeding season. They have a bright red skin patch on their forehead. Crane chicks are hatched cinnamon brown and turn grey as they mature. One of the most distinguishing feather characteristics is the distinctive “bustle” that both males and females display. It is visible while the wings are folded. The adornment gives the appearance of an enlarged, somewhat rounded, droopy tail, and often these feathers are confused as being part of the tail. Actually, the embellishment is elongated wing feathers which are modified for display. These feathers, called tertials, are located along the wing close to the body and are nearly invisible when sandhills are in flight. The tail is rather nondescript and relatively short; look for this the next time you see cranes flying.

What do sandhills eat?

How long do sandhills live?

In captivity cranes can live up to 30 years. In the wild, many sandhills die within the first two years; if they survive this period, they can live 15-20 years.

Why do cranes dance?

Dancing contributes to pair bonding and allows rivals to assess one another prior to courtship. Parents teach young chicks, also known as colts, to dance. Juvenile cranes practice dancing for years before they select a mate. Cranes also dance when they are excited, frustrated, or just need to release pent-up energy. Cranes are considered the most accomplished dancers in the animal kingdom (other than people).

Do sandhills mate for life?

Generally, cranes mate for life; rarely divorce is known to occur. A pair will return to the same nesting area each spring. When they arrive, the young from the previous year who have migrated north with their parents are driven off while the pair begins a new family.

How old are cranes when they mate?

In the wild, cranes usually do not mate before they reach the age of four or five. Prior to that time, juvenile cranes form “bachelor flocks” which travel and feed together until they are ready to breed and set up a territory.

Where do cranes nest and what do their nests look like?

Nests are simple, mound-like platforms made of marsh plants, grasses and weeds piled on the ground in marshes or wet tundra. They may be four to five feet in diameter.

How many eggs do they lay and who does the incubation?

Cranes usually lay two eggs in late April or early May. Incubation takes 28-30 days, with both sexes incubating 50% of the time. During nesting season cranes are shy, secretive, and easily disturbed. Usually only one chick survives to migrate with the flock in the fall.

How quickly do baby cranes develop? 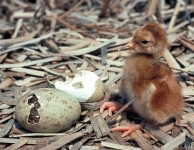 1st month – chicks sleep under their mother’s wings for three to four weeks. During the day they run, flap their wings and eat food presented by their parents. 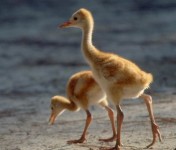 3rd month – colts learn to forage on their own, dance, practice take-off and landing skills and fly with their parents.

At summer’s end, the colts are ready to migrate south with their parents.

Why are sandhill cranes so noisy?

Cranes have a highly developed communication system: to keep the family together, to signal danger and to reinforce the pair-bond. The unison call is a duet done by a breeding pair in which the male has a one-note call, and the female a two-note call. It is done in synchrony and can be heard up to a mile away. The guard call is usually one loud sharp note, and is given to alert other sandhills that an intruder is near. The cry of the sandhill crane is among the most distinctive sounds in the animal kingdom.

How far and high can sandhills Fly?

They can fly up to 400-500 miles in one day, usually at an altitude of around 6,000 to 7,000 feet, but often as high as 13,000 feet as they migrate through the Rocky Mountains. During fall migration, most cranes will fly slower than in the spring in order to accommodate their young who cannot fly as fast.

Did you know that sandhill cranes have three eyelids? 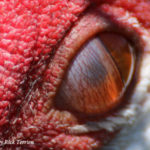 In addition to the top and bottom eyelid that we are familiar with, cranes have a third lid called a nictitating membrane. The membrane closes horizontally over the eye to help keep it moist and protect the eye from dust and other debris. Pictured is a Sandhill Crane’s nictitating membrane. Thank you, International Crane Foundation, for this interesting crane fact. 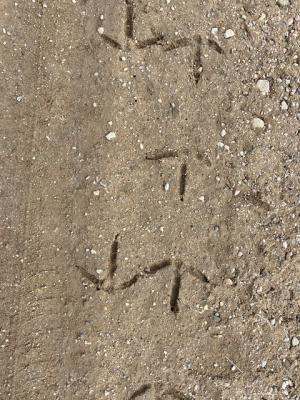 The Sandhill Crane leaves a large track similar in size to the Great Blue Heron but different in structure. Cranes and herons, like most birds, have four toes on each foot, three facing forward and one pointing backward. Herons’ toes are the same length allowing them to grip branches and perch in trees. In sandhill cranes, who never perch in trees, the backward facing toe is short and rarely makes an impression in the soil as the bird walks. Sandhill Cranes place one foot directly in front of the other in a straight line. You might think their tracks would be offset a little from side to side as human tracks are when we walk but that is not the case with cranes. Cranes have a razor-sharp claw at the end of their toes, which are sometimes visible in their track marks (as in the photo).