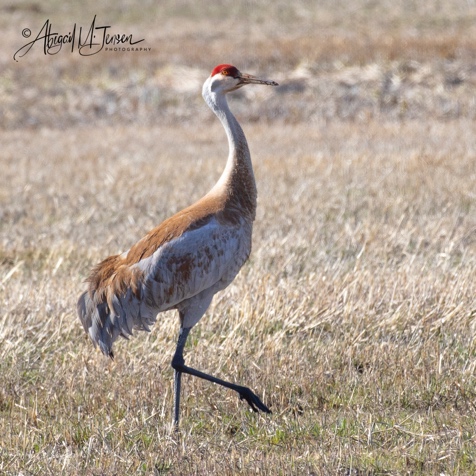 There are 15 species of cranes throughout the world but the sandhill crane is the only species found in Colorado. The entire sandhill crane population consists of 5 sub-species. All of the cranes in Northwest Colorado are of the sub-species Greater Sandhill Crane (A. candensis tabida). More specifically, the cranes that breed and stage in Northwest Colorado are part of the Rocky Mountain Population of Greater Sandhill Cranes.

The primary nesting areas for the Rocky Mountain Population of Greater Sandhill Cranes include Grand, Jackson, Moffat, Routt, and Rio Blanco Counties. However, in the last 20 years very small numbers of cranes have been found nesting in Mesa County, western Montrose County, and more recently in Delta County. Nesting may also be occurring in Gunnison County. It’s likely that other nesting locations are known and will be reported as crane populations continue to expand in Colorado. 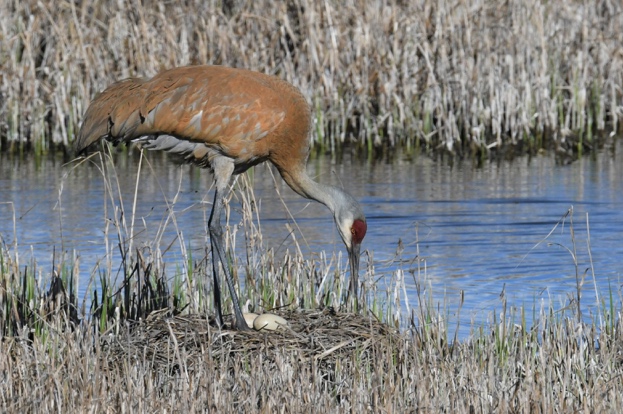 In the spring, as traditional nesting grounds begin to thaw, pairs of Colorado cranes scatter from staging areas and disperse to nesting territories, which are areas of habitat that are defended against other nesting cranes. Upon settling into a territory, new nest construction commences or annual repairs on old nests begin in earnest. During the nesting season, cranes tend to be very secretive, not willing to divulge the location of their carefully hidden nests. However, in recent years, cranes are becoming less wary and nests are being found in relatively close proximity to homes and ranches in Routt and Moffat Counties.

Crane nest sites are almost always closely associated with water and always on the ground, never in trees. Typically, nests are placed so they are surrounded by water. Along the Yampa River Valley, cranes often build their nest primarily using cattails. At higher elevation, where cattail wetlands are not as common, willow-lined streams or beaver ponds are preferred sites. In these areas, nests are typically constructed with willow branches, sedges, and grasses. In riparian habitat with beaver populations, crane nests are constructed on beaver lodges, beaver dams or on grassy hummocks growing in and around the ponds.  Studies conducted by managers and biologists with the Colorado Division of Wildlife (now Colorado Parks and Wildlife) show that about 50 percent of the nests are associated with North America’s largest rodent, the beaver. A few nests have been documented in upland areas, often in sagebrush but close to water sources. Some nest sites in Colorado have been occupied almost continuously for 25-30 years or longer.

Cranes spend a large amount of time on the ground. Muscular thighs and strong bones support the crane’s long, scaly, gray-black legs. The feet, with three primary toes, are extremely powerful and tipped with impressively sharp claws. They are formidable weapons for protection against predators. The backward facing toe, called the hallux, is rudimentary and only about one inch long, which makes gripping branches and perching in trees impossible. An adult crane on the ground can effectively defend newly hatched colts from predatory coyotes, foxes, weasels, ravens, golden eagles, and raccoons. The extremely powerful bill is also used for defense.

As a prelude to and during migration, sandhills gather together in large flocks in long-established sites called “staging areas.” Staging areas are used by migratory birds as resting and feeding areas in the spring prior to dispersing into nesting habitats and in the fall prior to winter migration. Three main staging areas are located in Colorado. Two are found along the Yampa River near Hayden and the Elk River west of Steamboat Springs. The third is a large site located in the San Luis Valley. Staging areas are closely associated with water, since cranes almost always roost at night in large groups in shallow water and along gravel bars in rivers, typically short distances away from the staging areas. The water provides protection from predators. Staging areas are good places to estimate juvenile nesting production. By carefully counting adults and colts the percentage of young birds can be determined. Typically, if 8 to 10 percent of the fall population is composed of colts, then it has been a good nesting season. Cranes using Colorado’s Yampa Valley staging area include cranes migrating from other northern states, so counts may be inflated by these non-resident migrants.

Colorado sandhills usually migrate during the day and prefer clear weather conditions, preferably with a tail wind. However, scattered reports occur of folks hearing cranes calling overhead during nighttime migrations. The birds follow invisible sky trails carved out by their ancestors over thousands and thousands of years. During migration, cranes likely use visual cues such as familiar mountains, rivers, and valleys to guide their route. The San Luis Valley staging area is a major stopover for the cranes during the fall and spring migrations. Primary sites include the Monte Vista National Wildlife Refuge and agricultural areas surrounding the Rio Grande River. In “The Valley,” with snow covered Mount Blanca as a backdrop, the birds gain strength for the final flight to traditional wintering grounds along the Rio Grande Valley in New Mexico. They use the same area again in the spring prior to dispersing to nesting territories in Colorado. 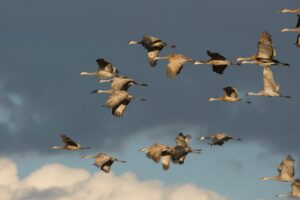 Based on radio-telemetry studies conducted by the Colorado Division of Wildlife in the 1990s, cranes migrating from the Yampa River Valley staging areas can complete the trip to the San Luis Valley in a single day. However, stop overs in the Roaring Fork and Eagle River Valleys sometimes occur, especially when young colts are migrating with their parents for the first time.

Greater Sandhill Cranes were part of Colorado’s prehistoric ecology for thousands, and perhaps millions of years prior to the first appearance of humans. Depending on the environmental conditions existing in a given geological era, crane occurrence and distribution across the rugged Colorado mountain landscape surged and ebbed in relationship to temperatures and the presence or absence of glacial ice sheets. At times, glaciers filled the mountain valleys leaving the habitat incapable of supporting nesting cranes. At other times, the mountain valleys were very similar to the present day and unison calls echoed in the aspens as pairs of cranes returned to ancient nesting territories.

The same sandhills we know today were foraging, nesting, and rearing chicks alongside the pre-historic megafauna that dominated Colorado’s wildlife during the late Pleistocene Period.  Some of these now extinct species include camel, ground sloth, mammoth, mastodon, long-horned bison, dire wolf, and short-faced bear.

Prior to recorded history, little is known about crane populations in Colorado. A few rock art petroglyphs and pictograph panels provide a glimpse into how Native Americans may have perceived, potentially with reverence, the presence of cranes. Archaeological studies in the Four Corners area have revealed the existence of sandhill crane bones in cliff dwellings and other sandstone ruins such as those found at Mesa Verde National Park.

Prior to European settlement of the west, Colorado sandhills likely nested throughout Colorado’s valleys, riparian corridors, and mountainous marshlands. There are scattered references to sandhill crane observations during early European settlement of Colorado. Several exploratory expeditions by various naturalists reported observations in the San Juan Mountains, the San Luis Valley, and in the White and Yampa River drainages. The Denver Museum of Nature and Science maintains several preserved sandhill crane study skins from cranes shot in Middle Park near Kremmling during the late 1800s.

Crane populations declined during the rapid expansion of the West as miners and other pioneers arrived and readily utilized the vast available wildlife resources as a primary food source. The decline and near extirpation of mule deer, elk, and bison in Colorado due to market and subsistence hunting has been well documented. Undoubtedly cranes were also part of the menu of the pioneer frontiersmen.

From 1900 to 1960 references to cranes are scattered, but an overall pattern is evident. The numbers of cranes dropped steadily as settlement continued in the mountains until only a small population of about 20 cranes remained in Routt County. In 1961, the staging ground count of cranes totaled 41 birds.

The passage of Colorado’s Nongame, Endangered, or Threatened Species Conservation Act in 1973 thrust the spotlight on sandhill cranes, which were one of a number of species included in the first listing. This new attention brought with it additional funding and stimulated a surge of management surveys. This resulted in greater documentation on the distribution and abundance of sandhill cranes in Colorado. The Greater Sandhill Crane was included on the endangered species list due to the small remnant breeding population in northwest Colorado with about 25 breeding pairs. The USDA Forest Service included sandhills in their resource management plans for the Routt National Forest and played an important role in the ongoing recovery of cranes in Colorado.

Because of difficulty in making a range-wide census in Colorado, the current number of nesting cranes can only be estimated. However, it is likely there are between 250 and 300 nesting pairs. Along with the nesting pairs, a number of juvenile, bachelor birds make up the Rocky Mountain Population of Greater Sandhill Cranes. 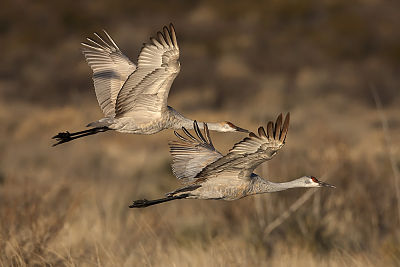