Every year we hold the first crane sighting of the season contest. A wonderful prize is awarded to the individual who submits the first photo. Click here for contest details.

Nancy Merrill, President of the Colorado Crane Conservation Coalition, was the first to report hearing cranes calling as they flew over the Yampavian Ranch in Hayden, CO at 7:35 p.m. on March 11, 2015. Of course, officers of the CCCC and members of the Yampa Valley Crane Festival planning committee are not eligible to enter the contest so we waited anxiously for the first photo from a community member to arrive in our email. We didn’t have to wait long because this year’s winner, Lauretta Davidson Monger, submitted the first photo of a pair of cranes taken on her ranch on County Road 69 at 3:33 p.m. on March 12. Less than an hour later Selina Kostur spotted 6 cranes on County Road 51 and submitted her photo which was taken at 4:30 p.m.

From that point on we received numerous emails, phone calls and photos. Click on the photos on the right to enlarge them. Here’s a summary of all of the reports we received throughout the month.

March 13, 2015 – David Dietrich sent an email to let us know that he spotted a few cranes feeding along the river bottom below highway 40 east of the pump house bridge. The road was too narrow to safely pull over for a photograph. He also heard numerous calls coming from the Cottonwoods near the Carpenter Ranch.

March 14, 2015 – Jocko Camilletti submitted a photo of cranes that he took with his phone but he didn’t say where he saw them.

March 15, 2015 – Jenette Settle submitted a photo of 2 cranes spotted near the intersection of RCR 35 and the rear entrance to Sidney Peak Ranch at approximately 3 p.m.

March 18, 2015 – Neil Siggson saw a single sandhill crane in the Milner Canyon on his way to work.

March 18, 2015 – JoAnn Paul reported hearing and seeing a flock of approximately 6 cranes north of Steamboat II/Silver Spur heading west at about 6 p.m. They were too high to photograph. She also spotted 3 small separate families of Eagles flying even higher. In her words, “A day of celebration and reunion!”

March 18, 2015 – Ryan Keating submitted a photo of a crane he heard calling in a
field along RCR 18 at the end of Pleasant Valley.

March 29, 2015 – Paul McConnaughey and his wife who were visiting from Cape Cod and went searching for cranes submitted photos of cranes they saw in the fields along CR 42.

Thanks to everyone who shared their crane sightings with us. We hope to see all of you at the 4th annual Yampa Valley Crane Festival – September 10 – 14, 2015. 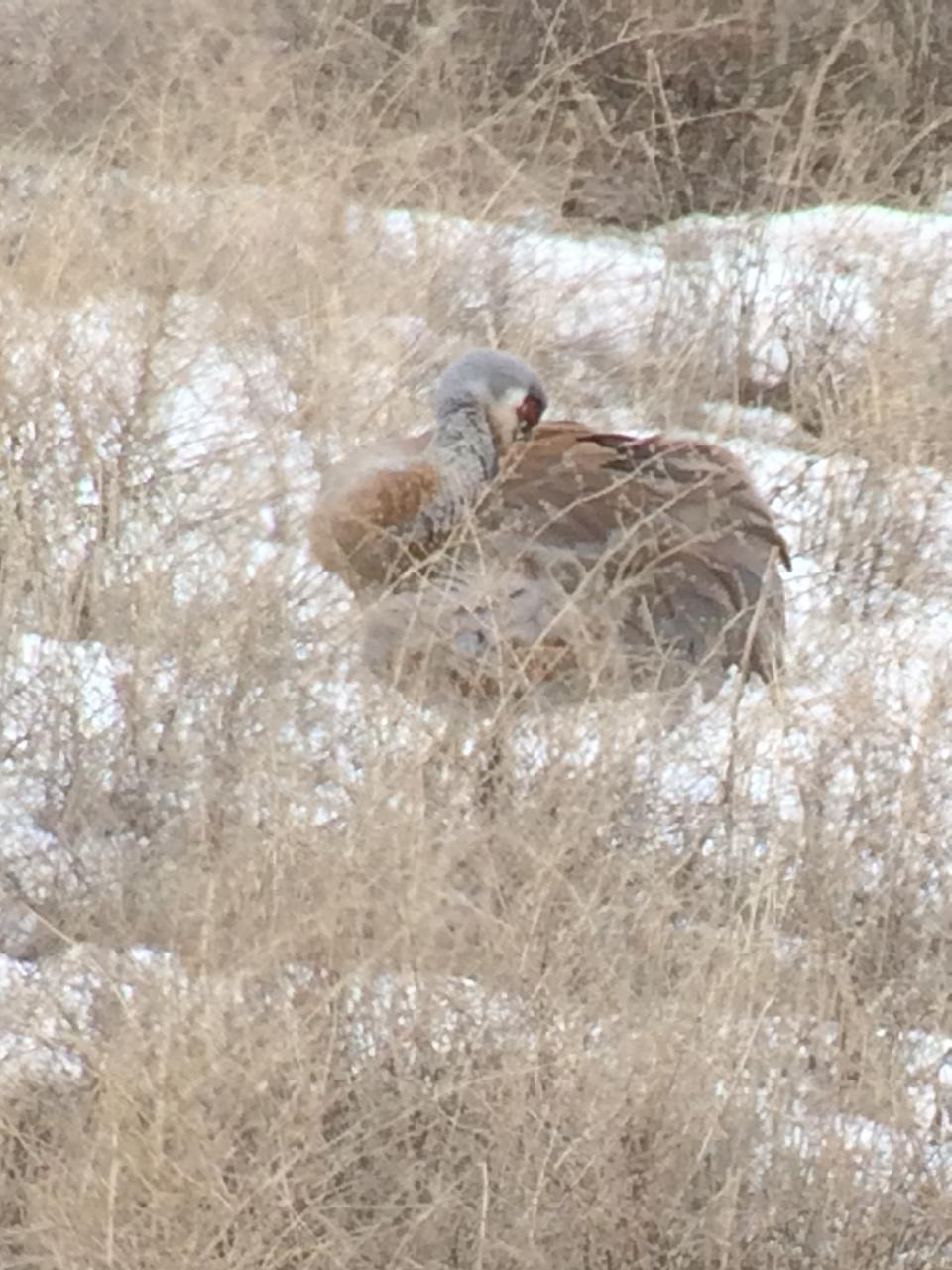 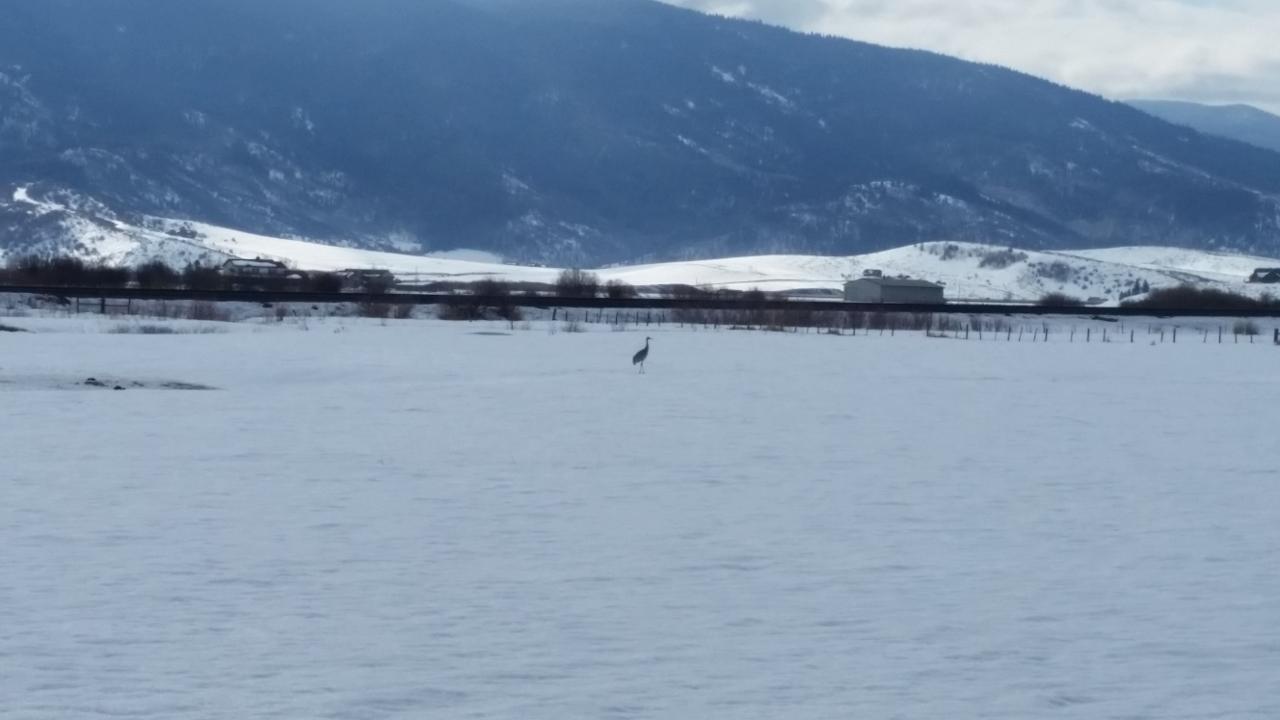 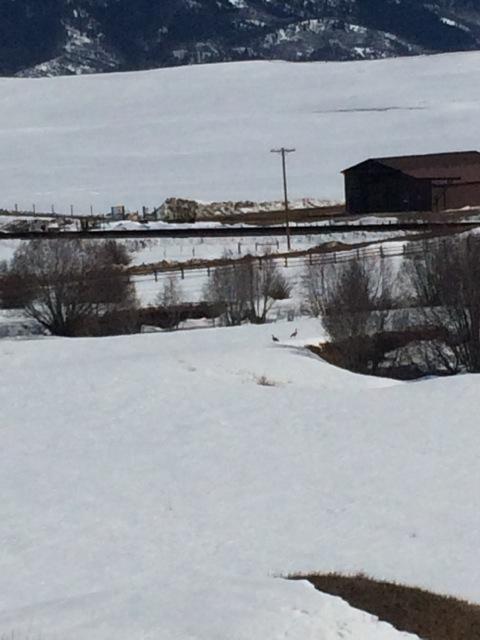 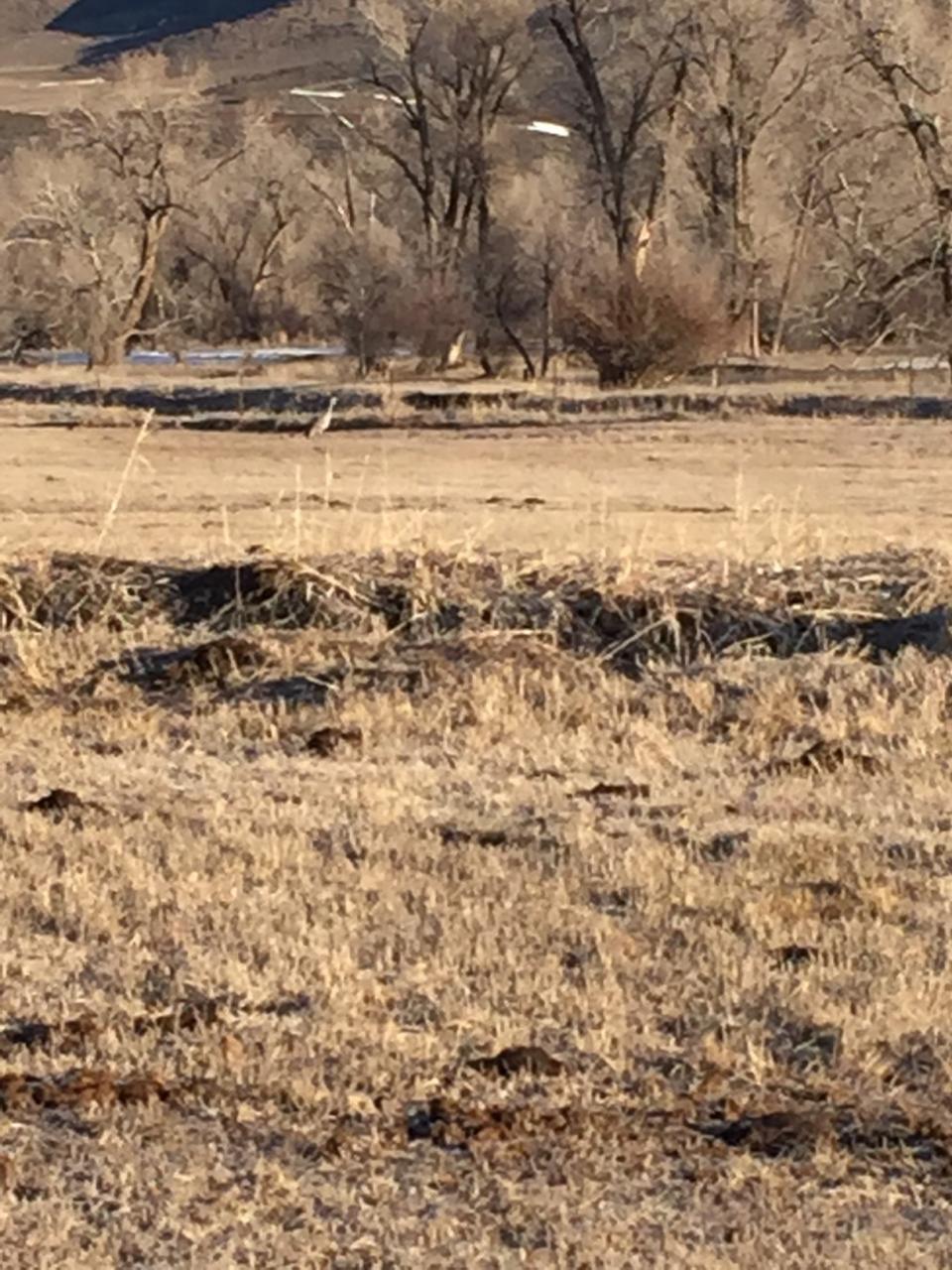 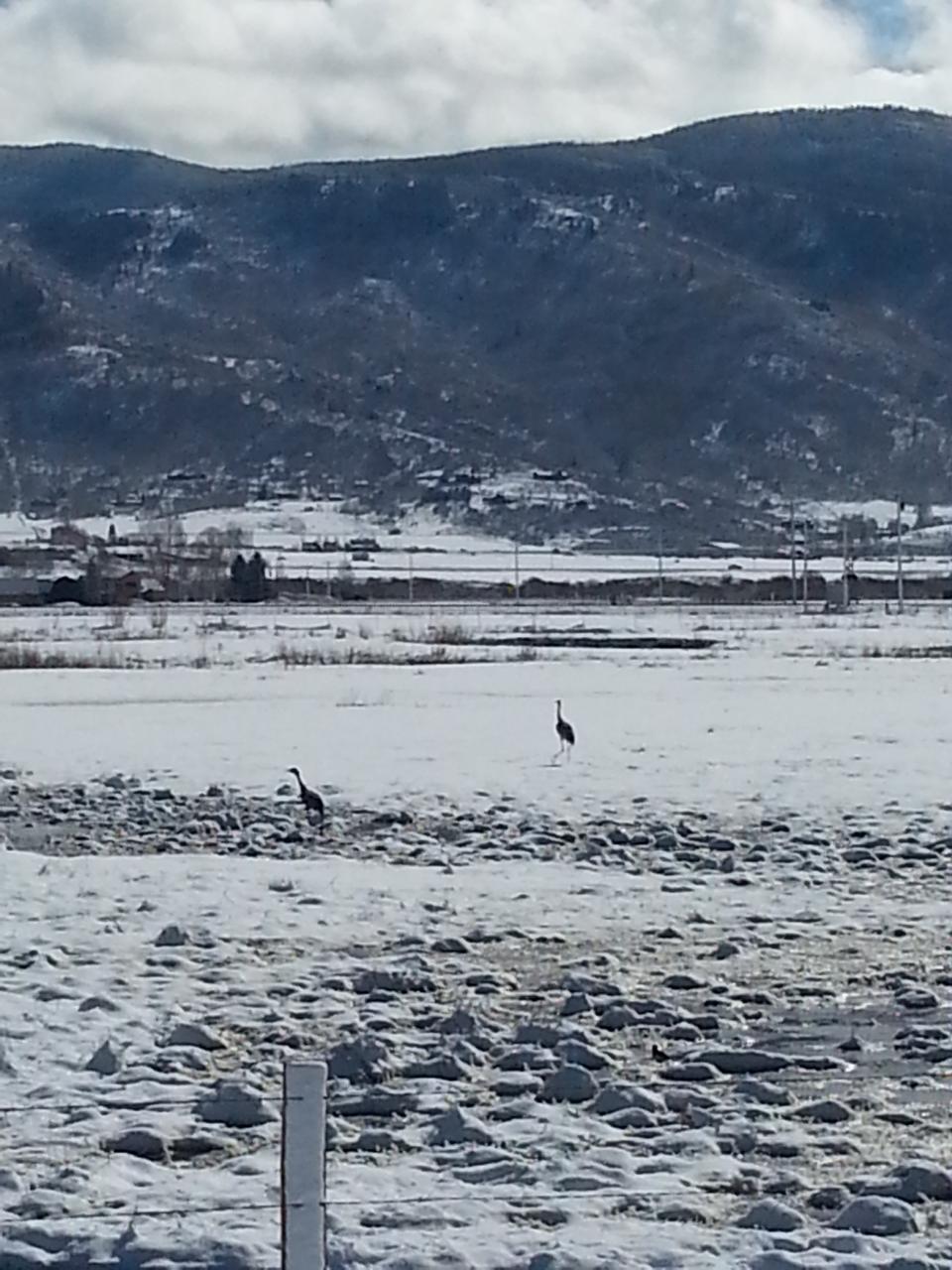 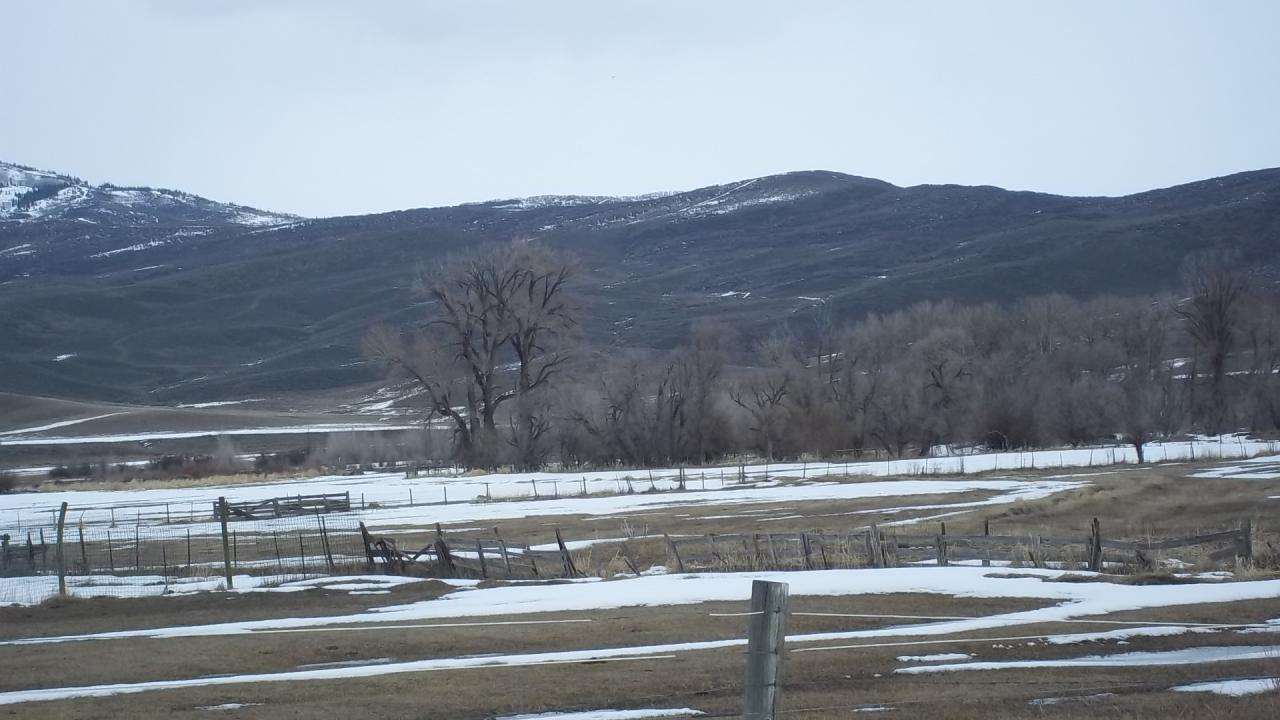 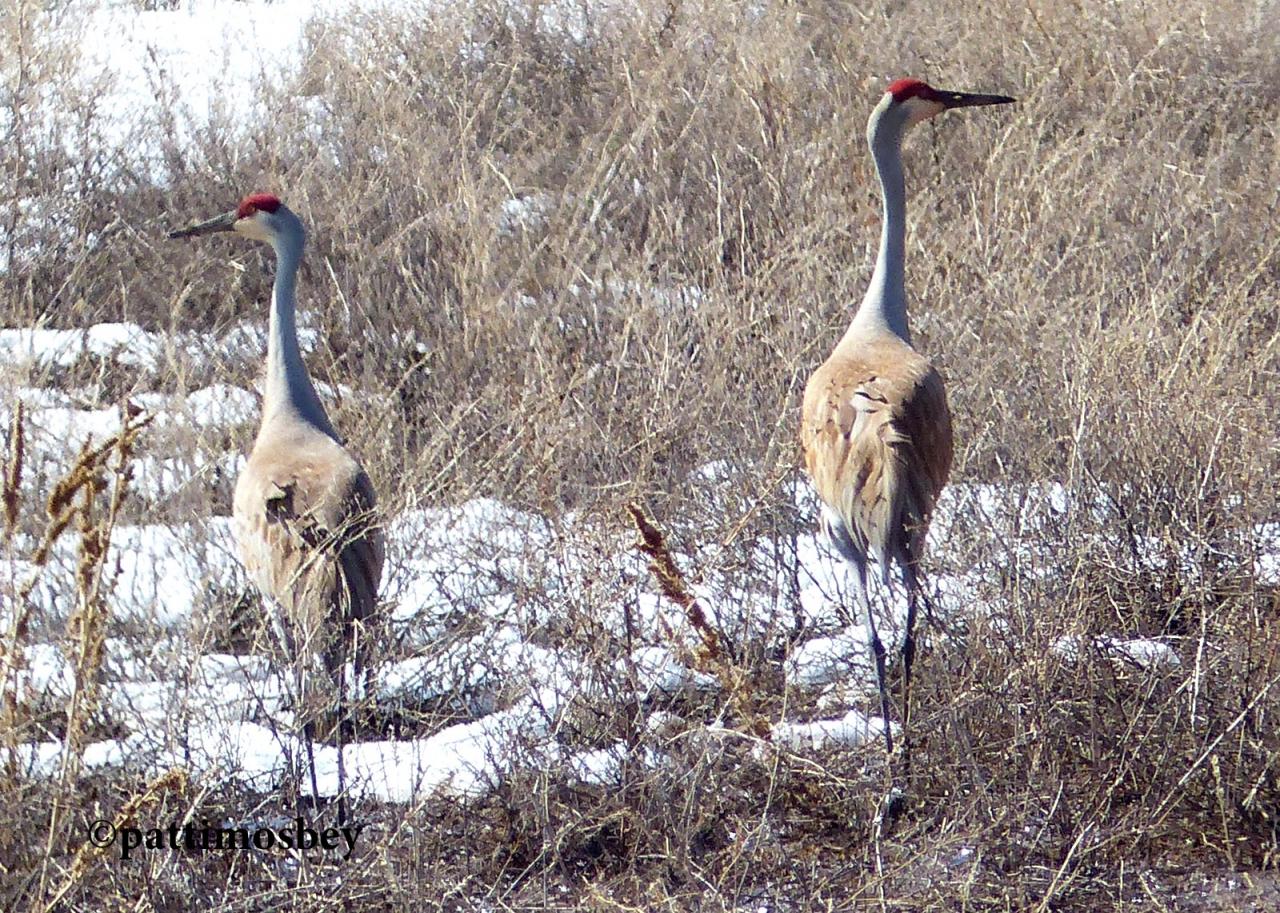 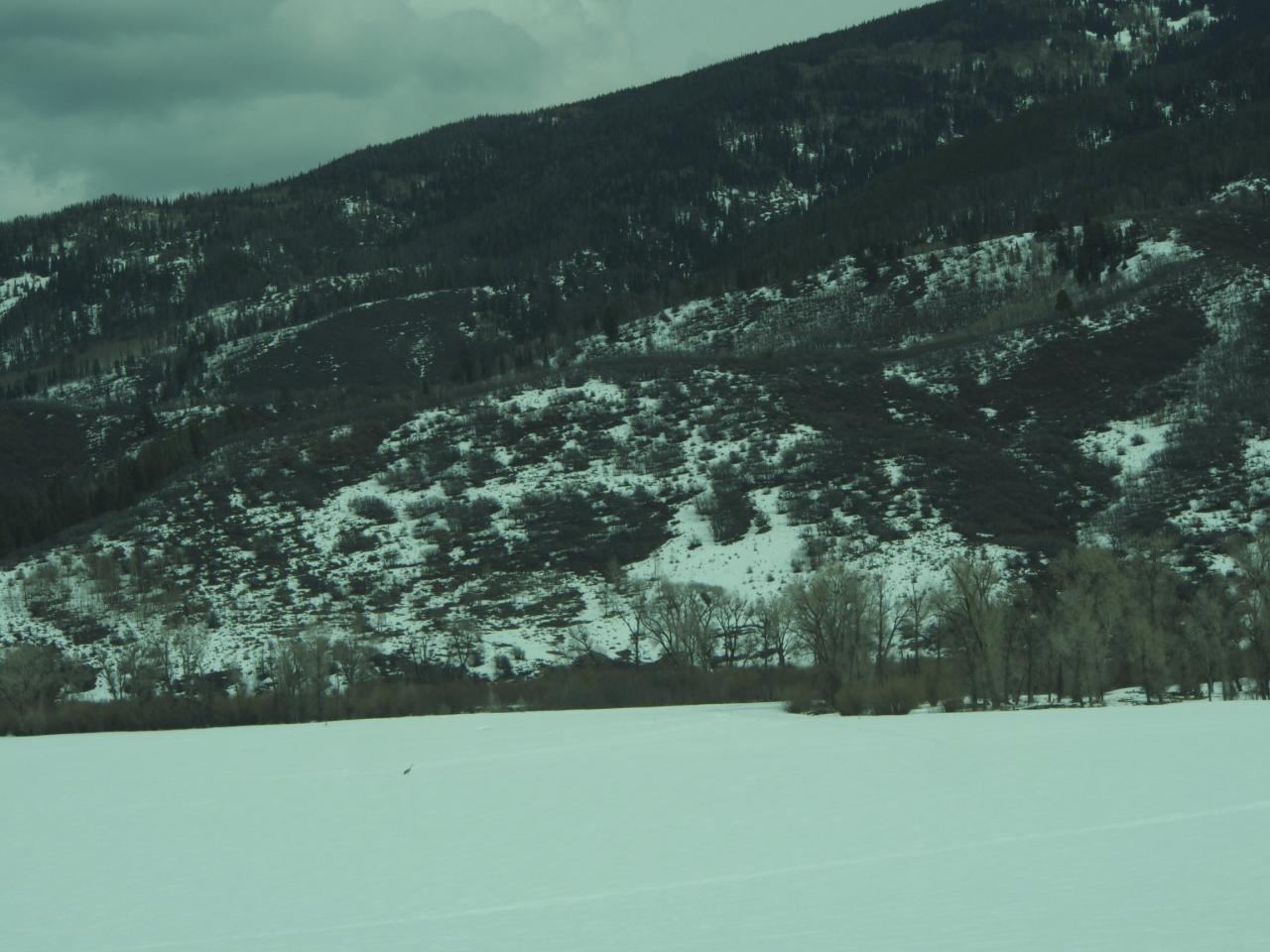 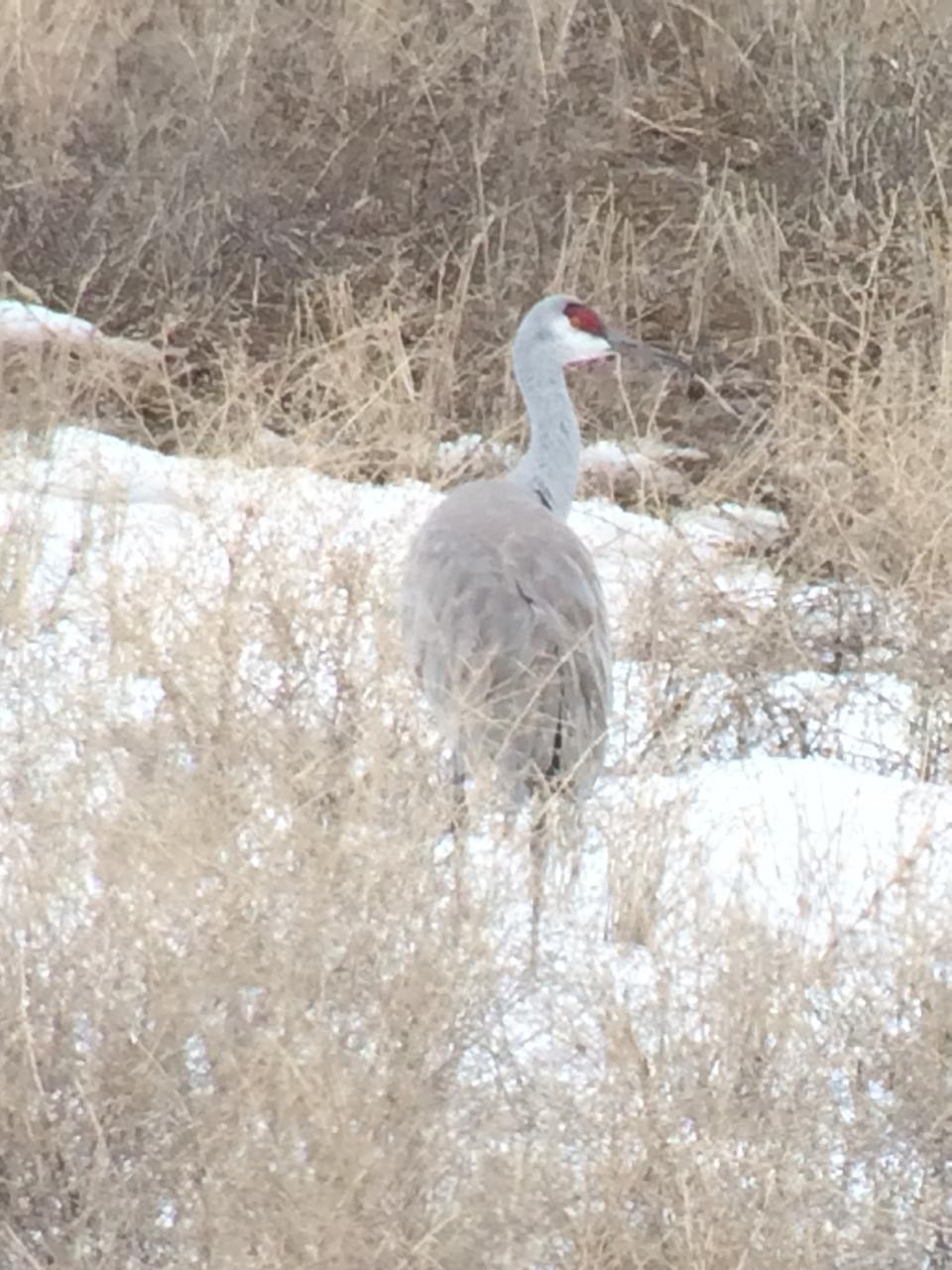 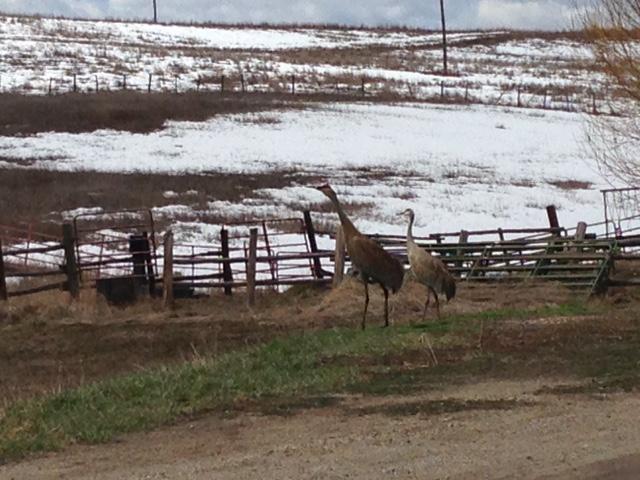 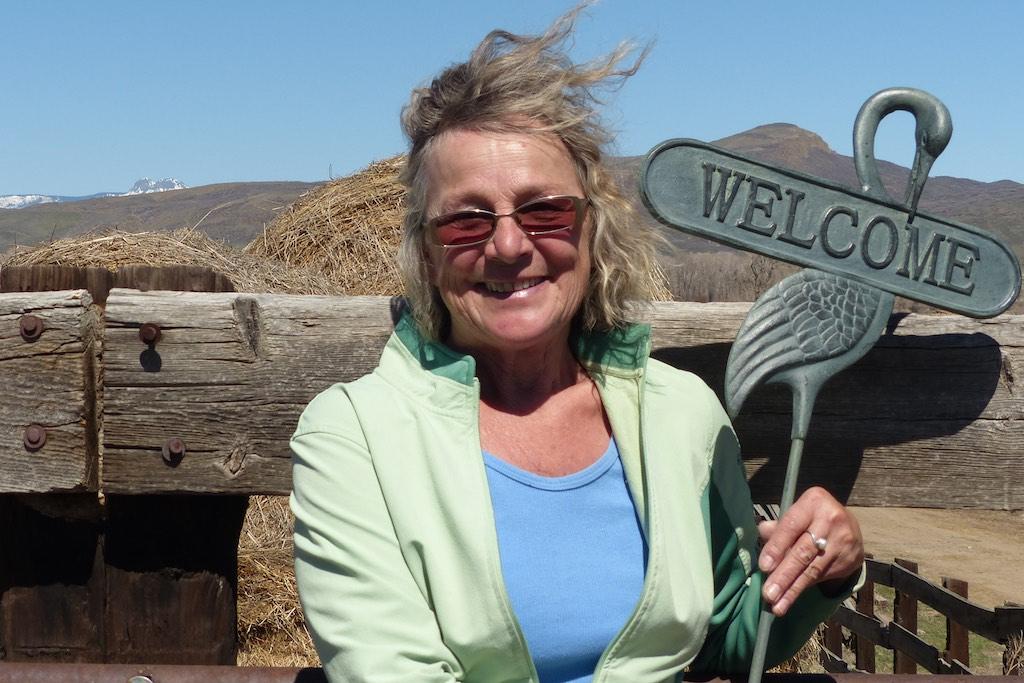 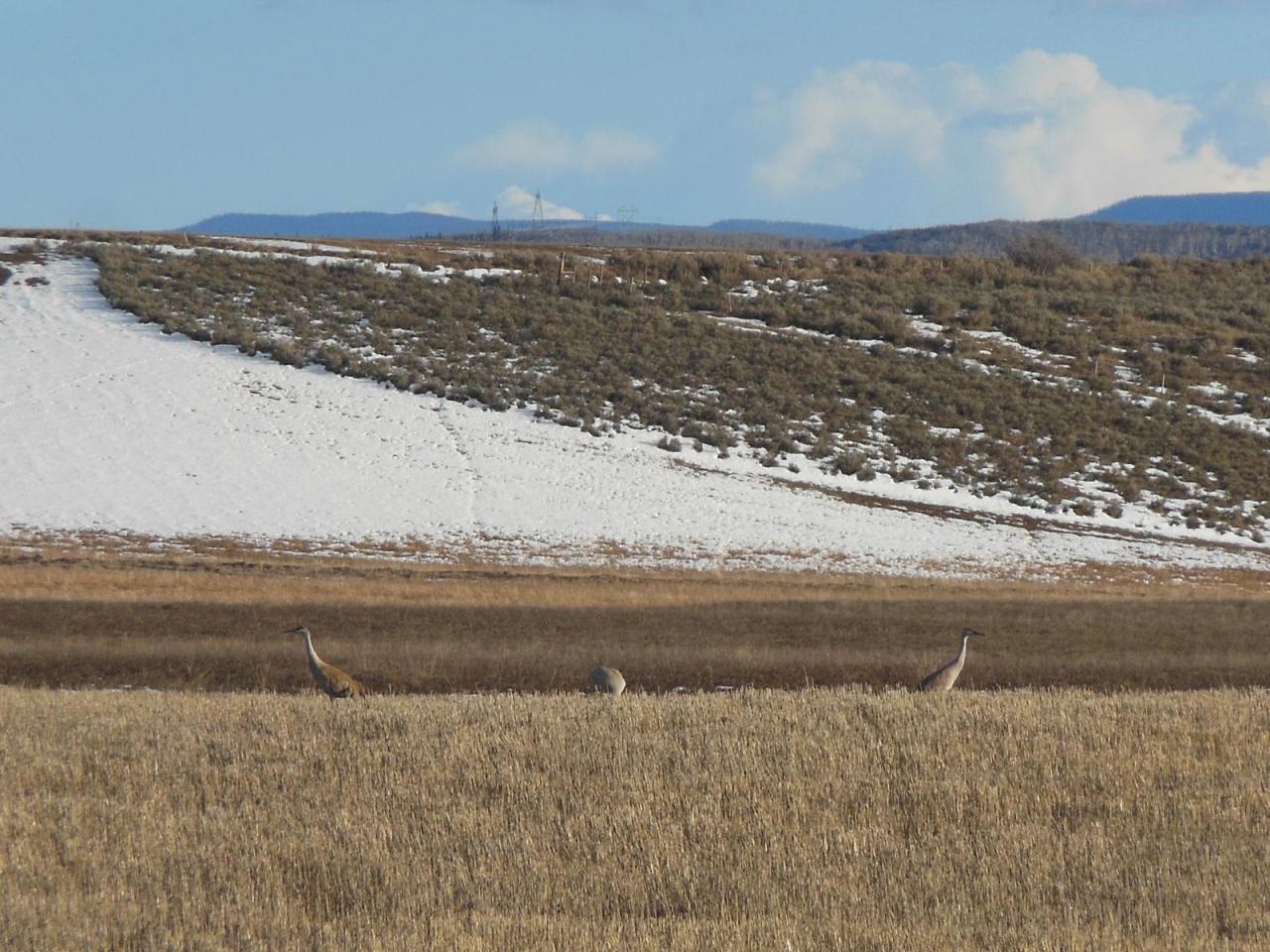 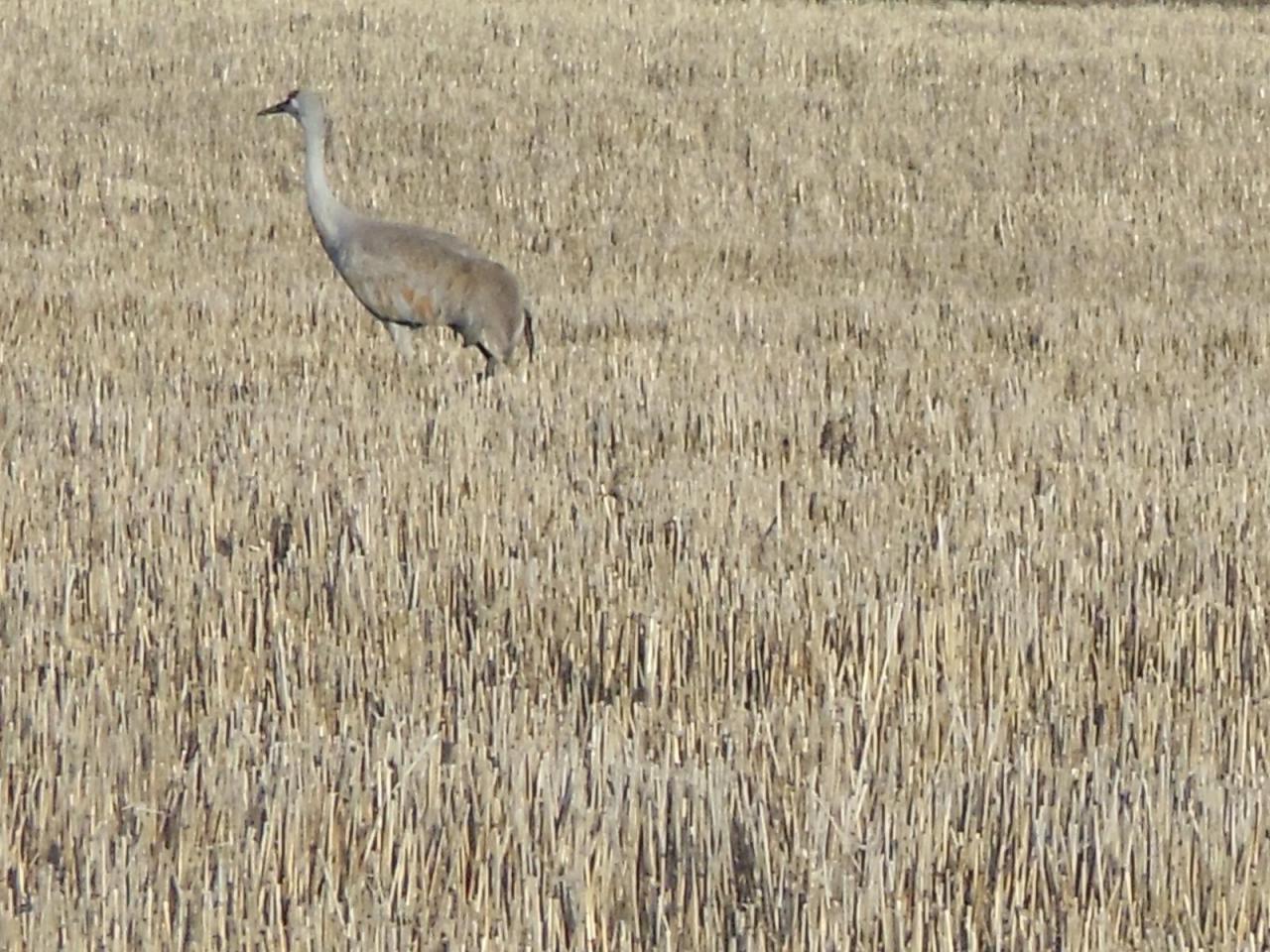 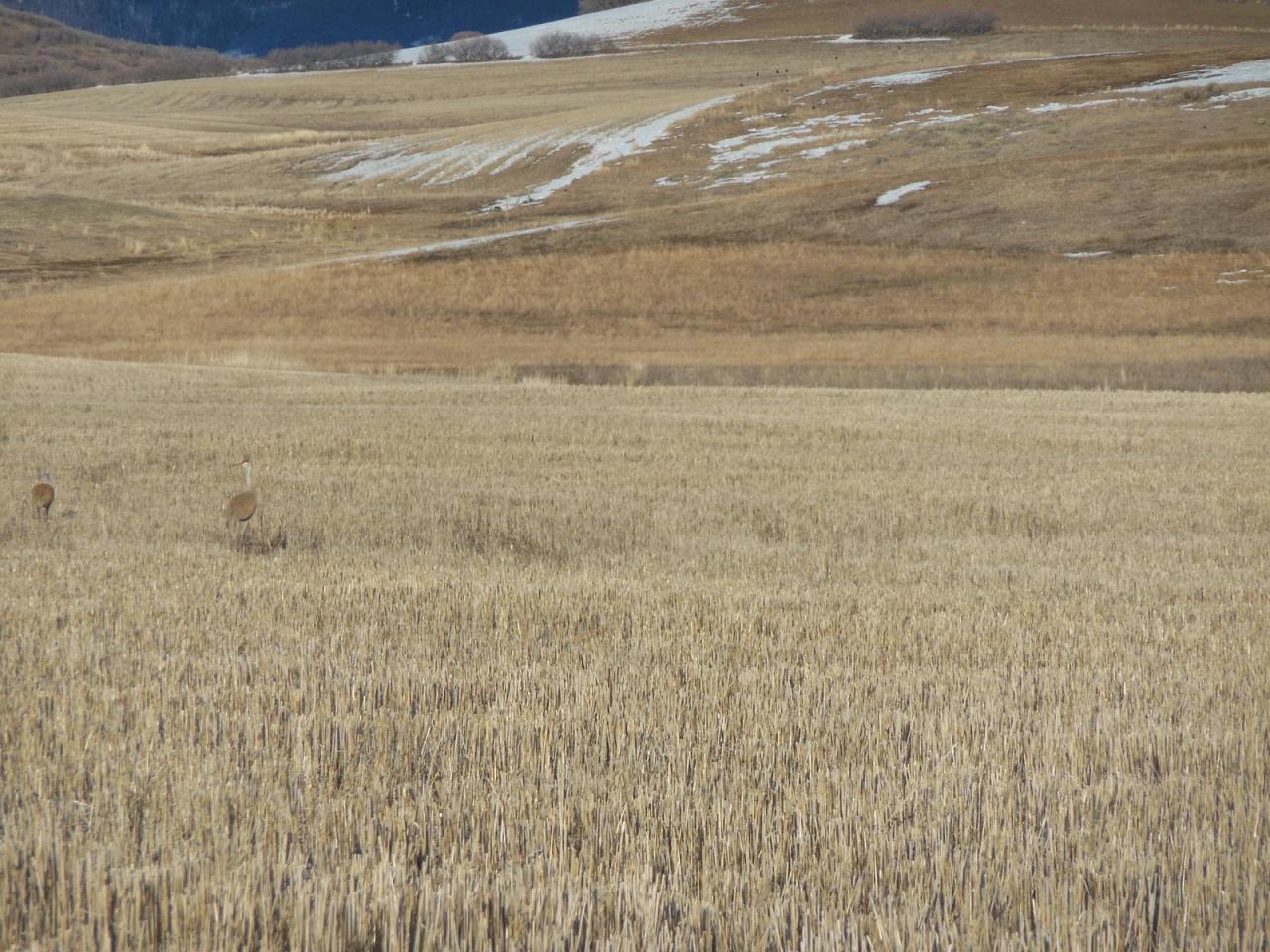