Yampa Valley Crane Festival volunteers once again had fun dancing in Steamboat Springs’ 4th of July parade and were thrilled to learn that, for the 2nd year in a row, they won the award for Best Group. This year’s parade theme was American Superheros. Volunteers flew kites graciously provided by Heather Henson of IBEX Puppetry, and danced along the route. This year there were 2 crane chicks in Sandy the Supercrane’s nest. The origami cranes passed out to parade spectators by crane colts were a great crowd pleaser. Join us at the 8th annual Yampa Valley Crane Festival in Steamboat Springs and Hayden, CO August 29 – September 1, 2019.

After the Steamboat Springs parade some of the cranes flew down to Yampa, CO to participate in their parade. They took 2nd and 3rd place prizes in that parade. Here they are after landing in Yampa: 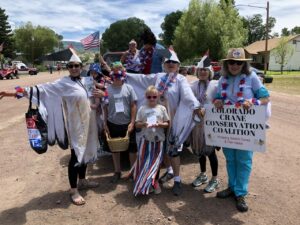 Hopefully the following photos will give you an idea of how much fun we had. Click on any photo to see it’s title and to enlarge it.