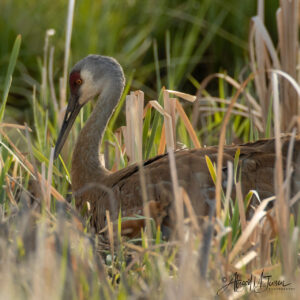 Greater Sandhill Cranes will return to the same general area every year to nest and typically build a nest in the same or similar spot. Nests are simple, mound-like platforms made of marsh plants, grasses and weeds piled on the ground in marshes or wet meadows. Sandhill Cranes in Colorado usually lay two eggs in late April or early May and incubate these eggs for about 30 days. Both crane parents will help in incubating the eggs and caring for the young once they hatch. When the eggs hatch, Sandhill Crane chicks are able to see, are covered in down feathers, and are able to walk within a few hours. After about a day, the chicks will leave the nest with their parents.

Learn more about Sandhill Crane nesting by checking out our Nesting FAQs! Watch our 2021 webinar: Everything You Want to Know About Greater Sandhill Crane Nesting. 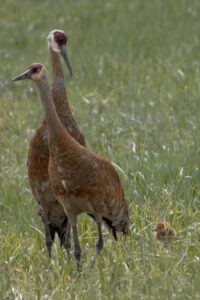 This year we focused the Nest Camera on Wilma and Fred, a crane pair that nested in the area in 2021 but were unsuccessful last year. Wilma and Fred built their nest around mid-April, laid the first egg on April 15th and the second egg on April 17th. Wilma and Fred faithfully incubated the eggs, taking turns on the nest, for over 30 days. One egg broke for unknown reasons in early May and was removed from the nest by Fred. Nevertheless, Wilma and Fred persevered. On May 17th, the remaining egg hatched and Pebbles was born. The livestream remained online after Pebbles hatched and Pebbles was frequently seen on camera during her first 3 weeks of life. The family eventually expanded their territory and were no longer seen on the camera once Pebbles was a month old. The family stayed in the general area of their nest throughout the summer.

You can continue to watch the highlight videos from the Nest Camera:

Here is what some people had to say about this year’s Nest Camera:

I want to thank Erin, Nancy, et al for the clairvoyant placement of Crane Camera, the brilliant commentary-instruction, and edited Highlights, and the daytime and especially those overnight dramas you were able to gin up for us, especially with those rascally raccoons.
~Richard

Thank you to the camera for following our family of 3 as they frolic in the grass! So adorable!
~Susan

Whoever is manning the camera is AWESOME! Love the pan shots and just everything you show us!
~Joey

Thanks so much Nancy and Erin for providing the nest cam again this year. It’s been great fun watching Fred and Wilma and now Pebbles!
~Amy

Photos of Wilma and Fred and their chick, Pebbles, on the day after hatching (photos by Abby Jensen):

Other Birds Observed on the Nest Camera

There are many other birds that share habitat with Sandhill Cranes. Here are the other birds we have seen or heard on the Crane Nest Camera:

Mammals Observed on the Nest Camera:

There are many mammals that share habitat with Sandhill Cranes. Here are the mammals we have seen or heard on the Crane Nest Camera:

The live video feed was made possible through grants provided by the Yampa Valley Community Foundation and the WHILD fund. Internet access for live streaming was provided by Zirkel Wireless. Camera installation and setup were completed by Photon Syndicate. Updated equipment was possible because of generous individual donors. Thank you also to CCCC staff and volunteers who monitored the camera and acted as tech support. Thank you to all our wonderful viewers without which this camera would not exist.